Marcus Willis has applied for a wild card for Wimbledon 2017 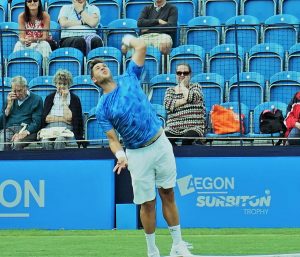 SERGETTI managed to catch up with player ambassador Marcus Willis at The National Training Centre in Roehampton (London, England) last week, here is what he had to say.

“I have had some good preparation on grass last week at Surbiton, a win against the former runner-up of the tournament Denis Kudla (ATP 184) and then a loss in a tight 3 set match to Alex De Minaur (ATP 243).

I intended to play at Nottingham but had to withdraw due to illness, I will now go to Liverpool where I will take part in the Liverpool Hope University International Tennis Tournament.

I have applied for a wild card for Wimbledon which would be fantastic if I am fortunate to receive one, the decision will be made on 20th June. If unsuccessful I will try to qualify again as I did last year.”

We have supported Marcus with the SERGETTI technology since April 2016 and were with him throughout his marvellous run at Wimbledon last year.

If you would like to know more about the SERGETTI technology please visit www.sergetti.com