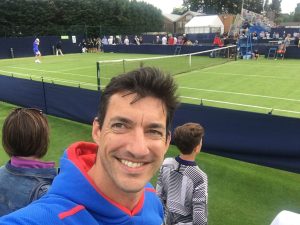 “I’m a club standard player playing in and around SW London mostly. As a club player then when I middle it then I can control and do what I want with the ball and put my opponent under pressure, but of course also as a club player there are a fair few times when I don’t middle it! That’s where my new Sergetti technology helps me out. Most miss hit shots tend to lose power and end up in the net meaning I lose the point every time but with the increased sweet spot many of these shots still end up going over the net, albeit a little short, but that keeps me in the point still and in with a chance!

This technology is a bit like having a larger headed driver in golf where you’ve got more chance of hitting the sweet spot more often, but the difference is I’m using my same old racket – just with a larger margin for error. With more chance of hitting the sweet spot on my racket then more of my shots have the power and spin that I’m trying to get which adds up to a more effective game – I can’t recommend this technology enough – try it, you won’t go back…”