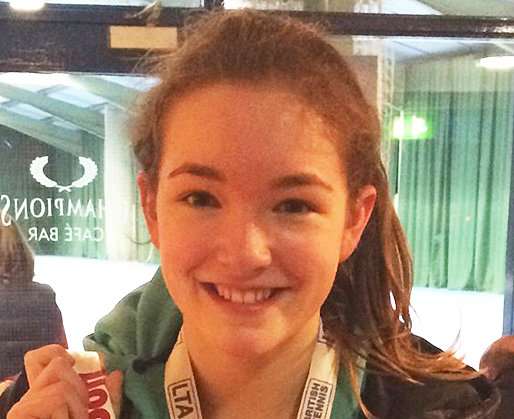 She is 14 and represents Great Britain at deaf tennis both juniors and adults. She also plays hearing tennis and won a number of competitions at under 14, 16 and 18.

“I’ve just started using Sergetti technology and I can already see the difference. My game is much more accurate and I’m making less mistakes and beating players that I’ve not beaten before who are rated above me and much older. I have much more control over the ball in difficult situations and can’t wait to play my next tournament with Sergetti technology”

A little more about Phoebe, written by her father, Sean:

Phoebe was born profoundly deaf and started playing tennis about 6 years ago. She is now 14 and got involved because she was spotted at a come and try session. She plays at Huddersfield and her coach is Matt Smith who has improved Phoebes game significantly. She also met a local chap called Craig just over 12 months ago who hits with Phoebe and this made a big difference to Phoebes game. She represents GB at deaf tennis both juniors and adults. Phoebe has also just been picked to represent Yorkshire at hearing Tennis in the county cup in April.

Phoebe has ambitions to be the best female deaf tennis player in the world and she believes Sergetti technology can help her achieve this. Phoebe is already the national ladies and mixed doubles champion. Phoebe has also won gold medal at the last European Championships in the junior mixed doubles and silver in the girls singles and doubles.

Phoebe plays hearing tennis too and has made significant progress in the last 12 months winning a number of competitions at under 14, 16 and 18. Phoebe continues to train hard and is competing regular and is optimistic about what’s in store for the future with the support she has and the progress she is making.