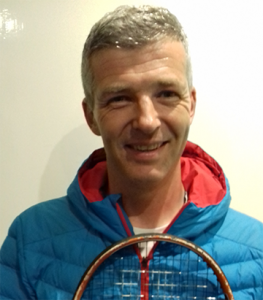 “I currently coach at Surbiton RFC and Esher LTC where I am the lead coach. I also compete as captain and player in the Surbiton Men’s team, and I participate in senior 40+ national singles and doubles events.

Prior to my using Sergetti stringing, I used differing racket and string setups for coaching and playing. For the past 18 months I have been using Sergetti in all my rackets. As a player, I feel the stringing provides good feel and give me confidence to intercept and influence play during competitive doubles. Playing singles, I am not feeling as tired in my arm when deep in the third.

In a similar vein, as a coach, I believe Sergetti stringing means less aches and pains when using a heavy racket for 6 hours a day”